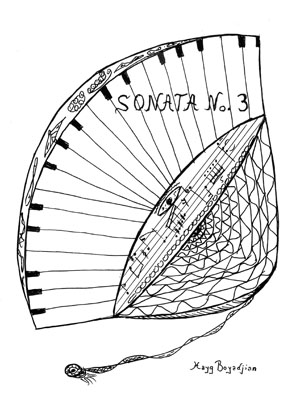 Cassiopeia for clarinet, cello and piano

Perseus for flute and cello

De Profundis for soprano and piano

Vientos for violin, guitar and mandolin

“There is grace, as well as pungency, in the New England Reed Trio’s rendition of Googleegoo…a work brimming with activity and good humor.”

WOMR 92.1 FM Selected Googleegoo as a favorite on the program THE LATEST SCORE: 2002 CONTEMPORARY ART MUSIC

“…short pieces of varying mood …sparse and relying on rhythmic figures and motifs as much as on pitch.”

“Boyadjian composed a format of free musical exposition allowing the musicians to express the dramatic, the introspective and finally a joyous mood …”

“…hints of Sibelius, Shostakovich, Holts, and Mussorgsky …full of shard-like melodic figures and raw scoring effects …this …composition never settles for the easy way out.”

“Odessas …at times perfumed with hints of Debussy or Bartok …well constructed, short entities of much substance, not frothy bonbons …rewarding listens from start to finish.”

SONATA No. 3 for piano

Living Artists Recording
Vol. 13-Just In Time Now and Then

including Boyadjian's Sonata No. 2 for piano, played by Ani Yeghiazaryan

Click here to go to YouTube and listen to performances of Hayg's music in Armenia, Argentina, and more. Newly posted: a recently resurrected recording of Hayg's Symphony No. 1 from the early 1990s.